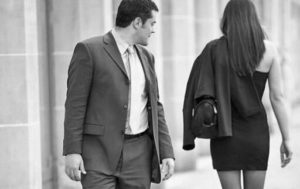 Some women’s features attract men’s attention more than others, we have picked six of these features that are backed by science.

Something to do with reproduction, men love a woman with a thin waist and larger hips, several studies have came up with this interesting fact. Researchers believe that a man can easily picture a woman having his babies if her hips are larger. The ratio found through research seems to be 7 to 10.

Men might not have a biological clock the same way women do, however, they are subconsciously attracted by any sign that can show a fertile woman. For some reason, healthy and shiny hair have been proven to be linked to a woman being able to reproduce, therefore, they would attract men’s attention even more.

A woman’s smile is everything, some women smile naturally, others do not. Men are highly attracted to a women’s smile and happiness. A woman who smiles, is also perceived as someone in a good place as well as happy and healthy.

Less is more as they say. In several studies men admitted being more attracted to women who wear light and more natural make up, like anything nowadays, trends come and go. We are at a time where the beauty industry encourages women to wear far more make up than we use to. Bear in mind that even if your make up looks great, it doesn’t look natural and that is what bothers men most. Not the fact that you are wearing any, but rather the amount your are wearing, especially during the day.

Men are far more attracted to a woman wearing heels, perhaps because it is sexier and more feminine. Again, not all women enjoy wearing heels and therefore, we are lucky to have plenty of choice; you can go for a 4cm heel or a 12cm. Some heels have platforms on the front to allow you to be more comfortable.
In one of our previous articles, we found a very interesting study that tested men’s attraction to heels in the street. A woman stopped men for the purpose of a survey, men stopped way more when the same woman was wearing heels, versus when she stopped the same number of men but wearing flats.

A higher voice is associated with a smaller and younger fit body, again something to do with a reproduction and men subconsciously being attracted by a fertile woman.